A few months ago I aske the RC/FPV community a series of questions what they use and how they fly. Today, it is time to announce the results!
In total, I got answers from 1739 people. I will not lie: the number is like 10 times higher I expected it to be. So that you! I appreciate the effort!

Let's go through the question one by one, with a short commentary.

In the last 3 months I've been flying... 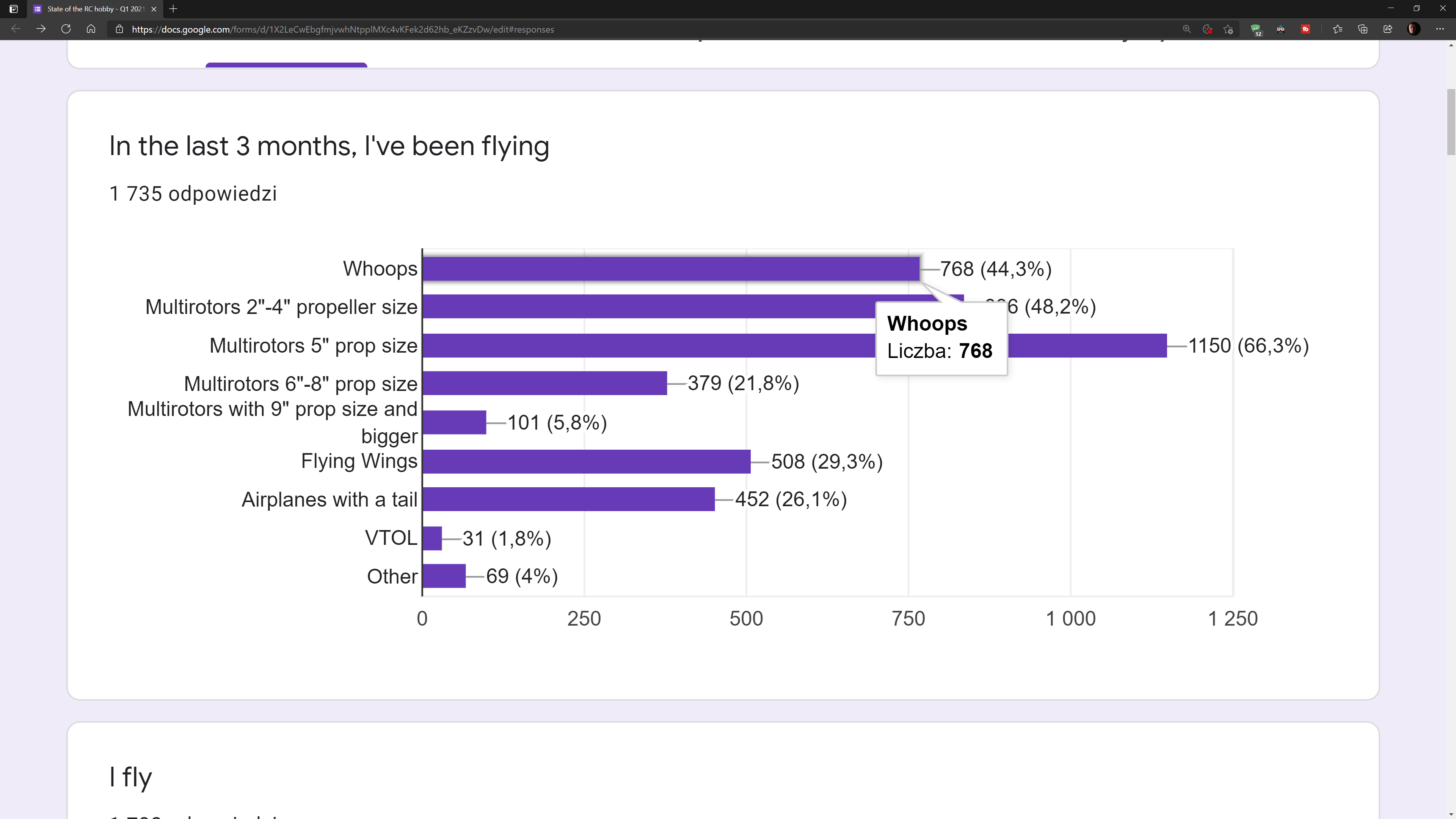 The winners are 5" multirotors. Just like expected. For years 5-inch quads are the most popular FPV build. For a reason.

The second place is also not a great surprise: 2 to 4-inch multi-rotors. This class is getting a lot of traction in the least few years and we have to expect it will be getting more and more popular. The reason is simple: you can get those in sub 250g category and solves a lot of legal problems during flight.

The third-place got to Whoop class. And that was a surprise. I never expected them are so popular. On the other hand, late February is still wintertime in the northern hemisphere and maybe that's the reason. When I will run this poll again in a few months, the market share of so-called whoops might be much lower. 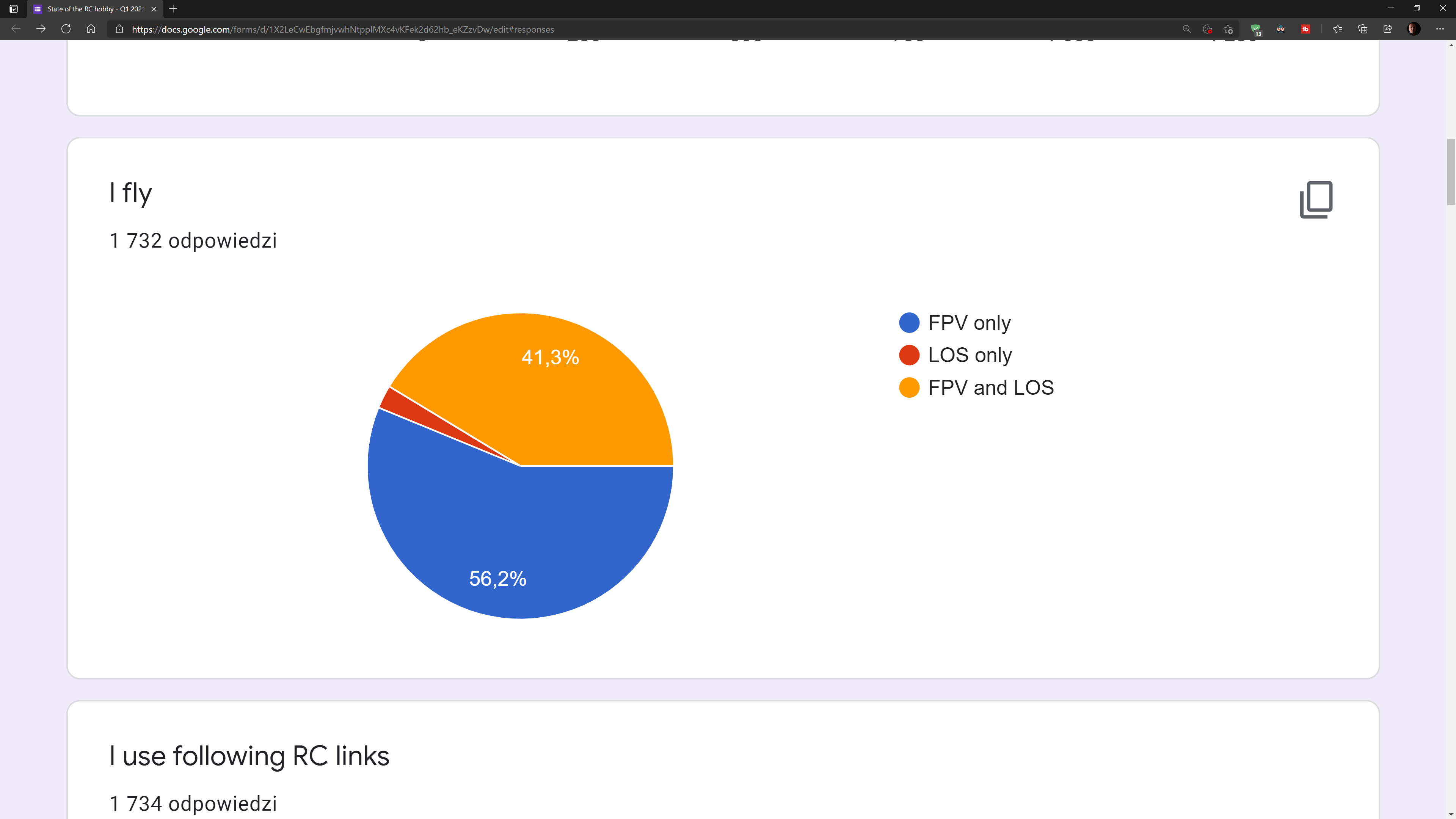 Here there is no surprise. It's either FPV or FPV and LOS or nothing at all. LOS-only pilots are a minority!

The most popular RC link 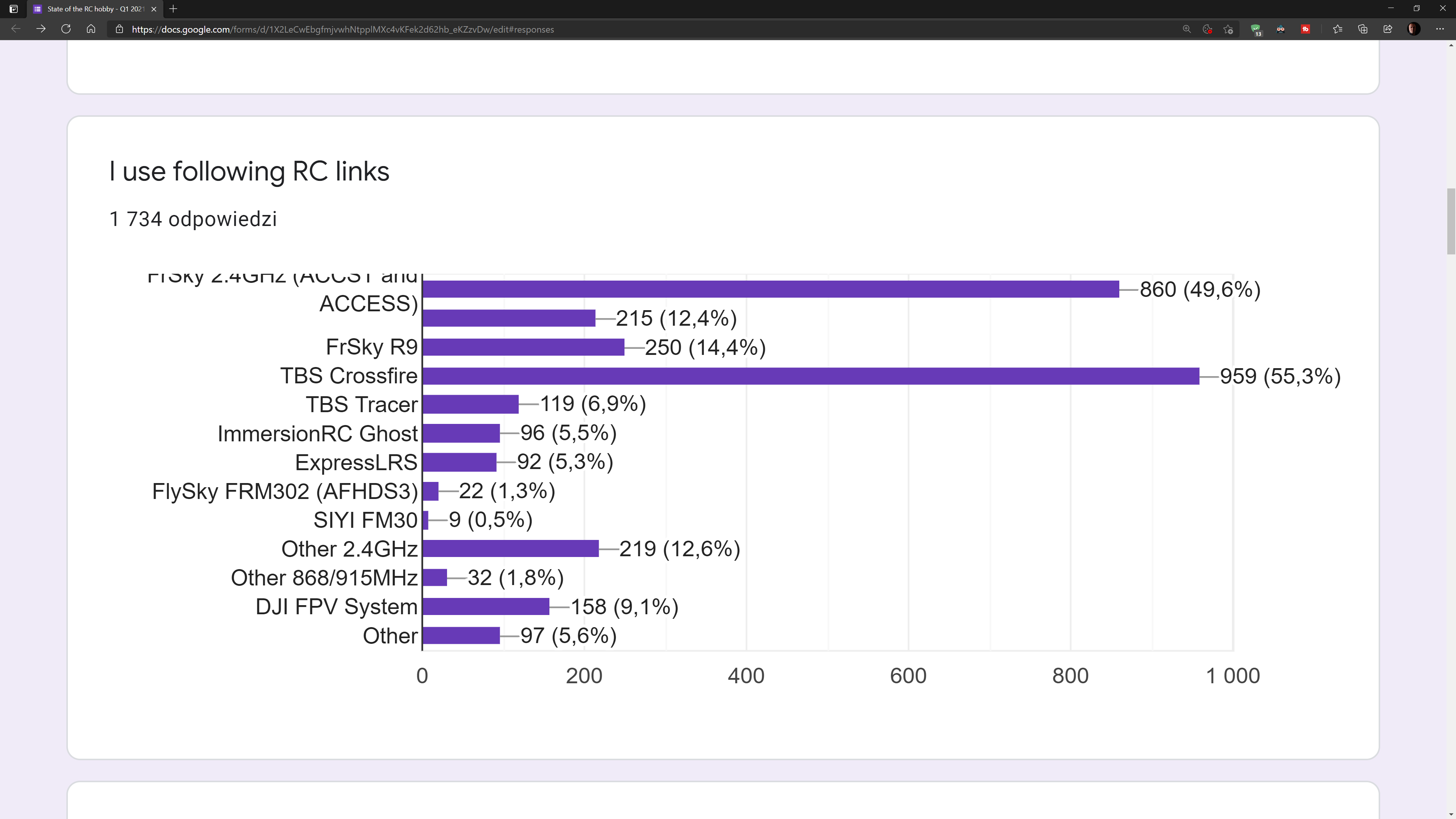 I know TBS Crossfire is popular but I had no idea it's that popular! 55% of survey participants claim they use Crossfire. I wonder if the fact that I advertised this poll in the TBS Lounge Facebook group has anything to do with it? Could be. Anyhow, the second place is not a surprise: FrSky or FrSky-compatible 2.4GHz RC links with 49% of the market share. And the third place goes to FrSky R9 system users.

The R9 and 2.4GHz FrSky link have competition now. I'm talking about ExpressLRS, ImmersionRC Ghost, and TBS Tracer. They appeared in 2020 but in that time they managed to get some users already. I wonder how it will look like in a year or so.

The most popular radio transmitter 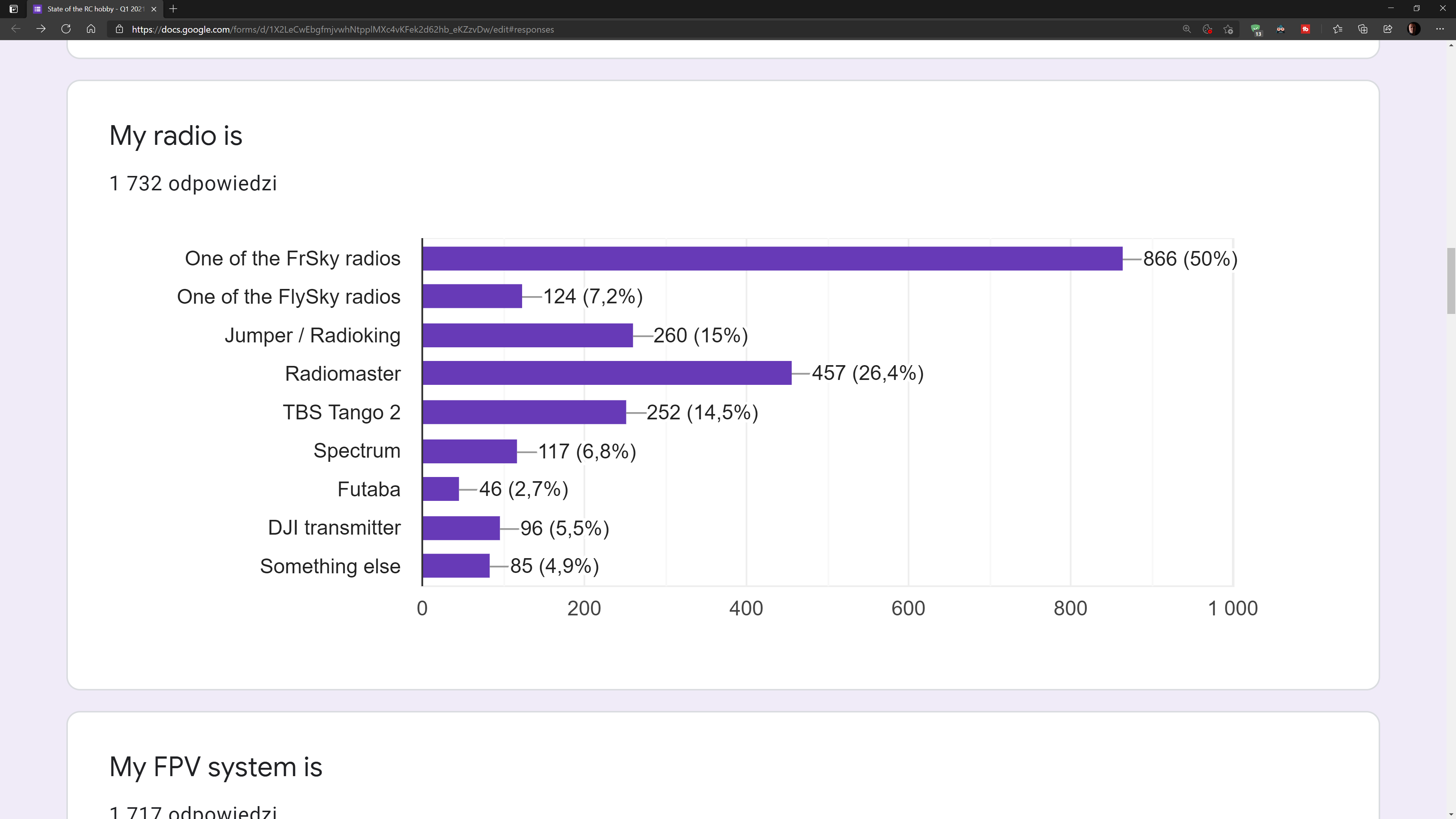 At first glance, FrSky is the winner in this category. But only at a first glance. Two years ago there were no Jumper T16, Radiomaster TX16S, or TBS Tango 2 at all. How much of a market share FrSky radios would have if the competition would not show up? My guestimate is around 90%!

If this estimate is correct, this means FrSky lost half of a market share in less than two years!

The most popular FPV system 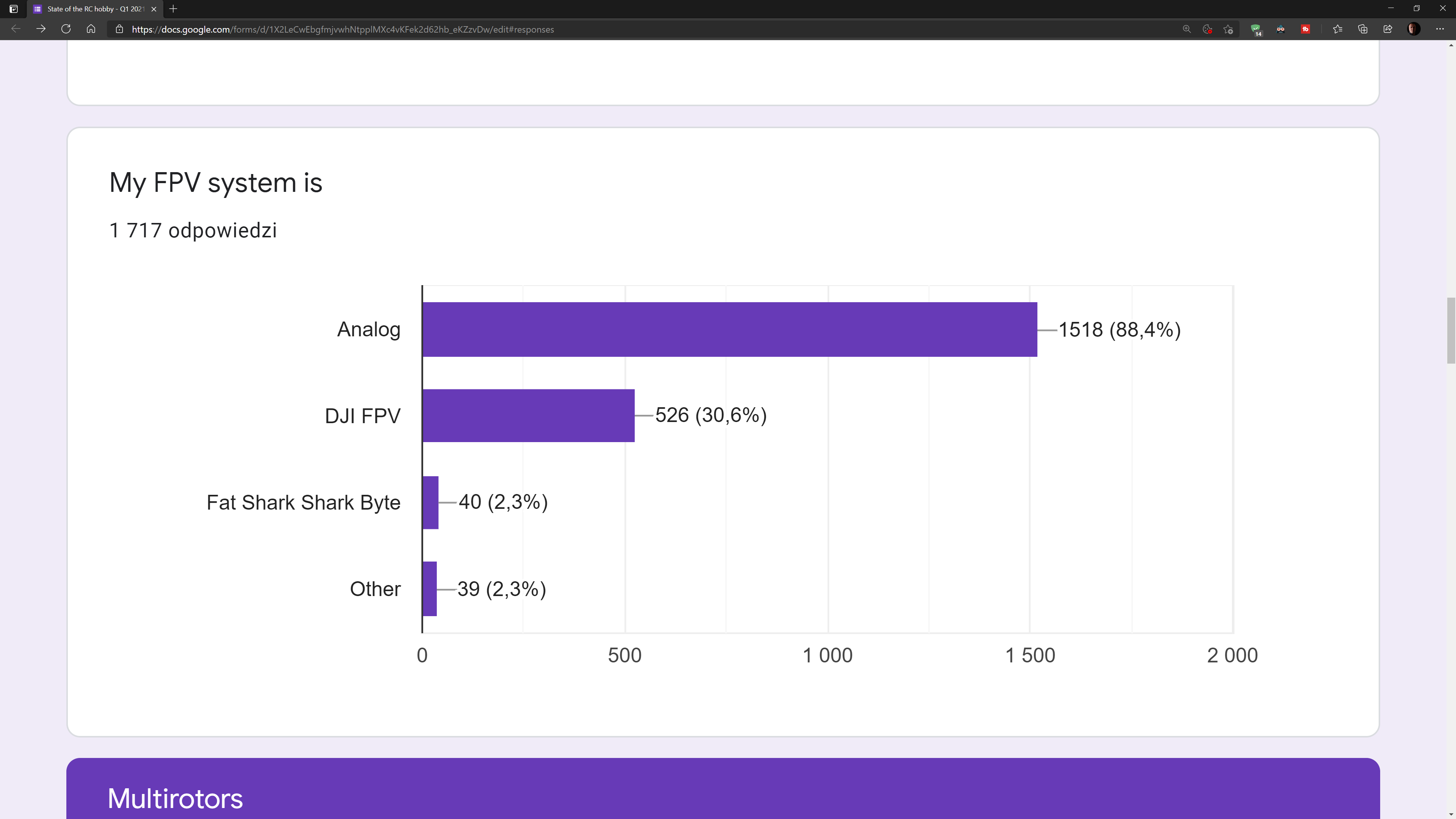 Analog still rules! But 30% of you admit that you use DJI Digital FPV. In less than two years, DJI tempted 30% of you to give them your gold coins. 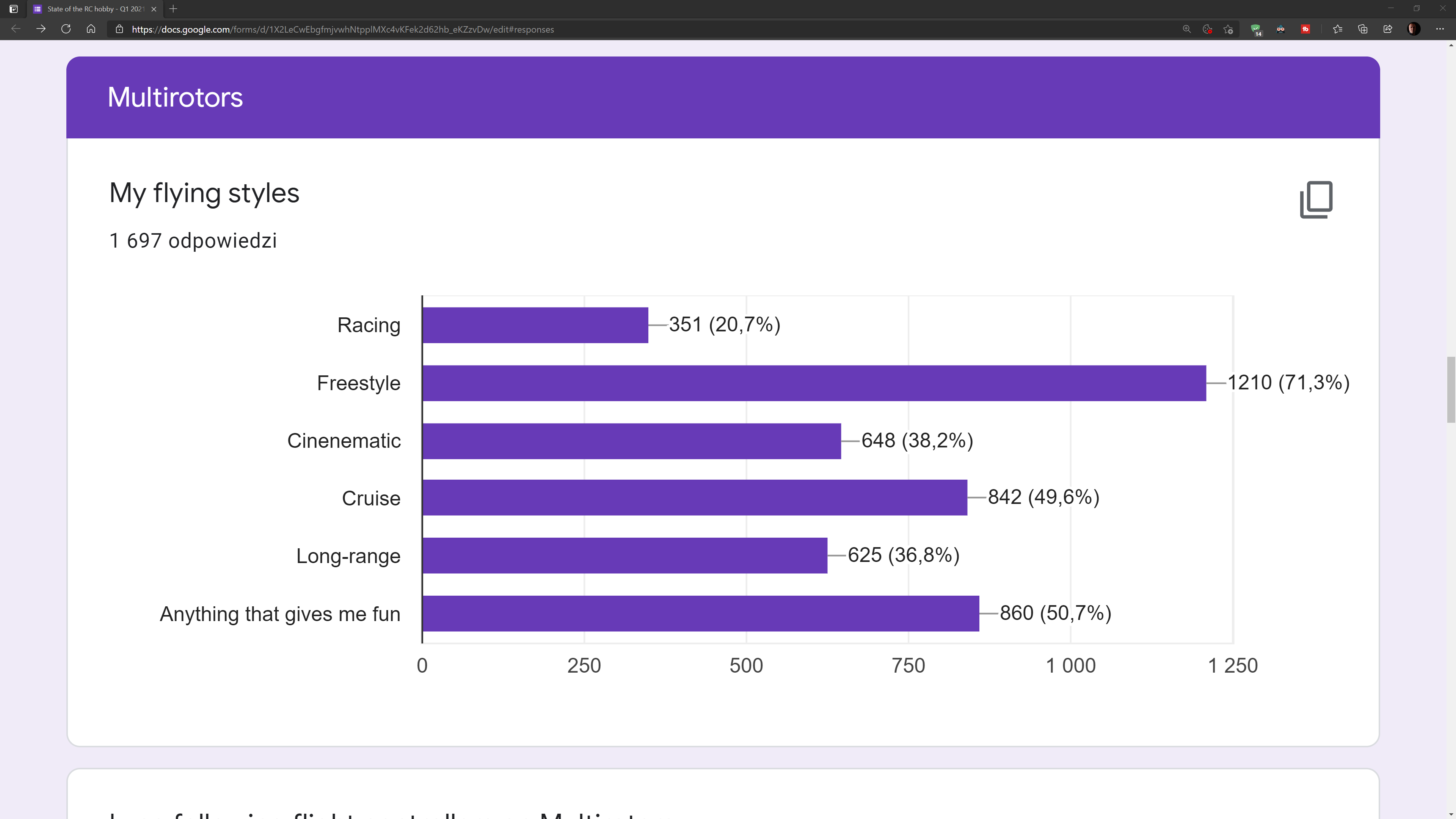 Many people like to call their 5" mini quads racers. Yet, only 20% of you use them for any kind of drone racing. Freestyle rules. But to surprise "Anything that gives me fun" takes third place! 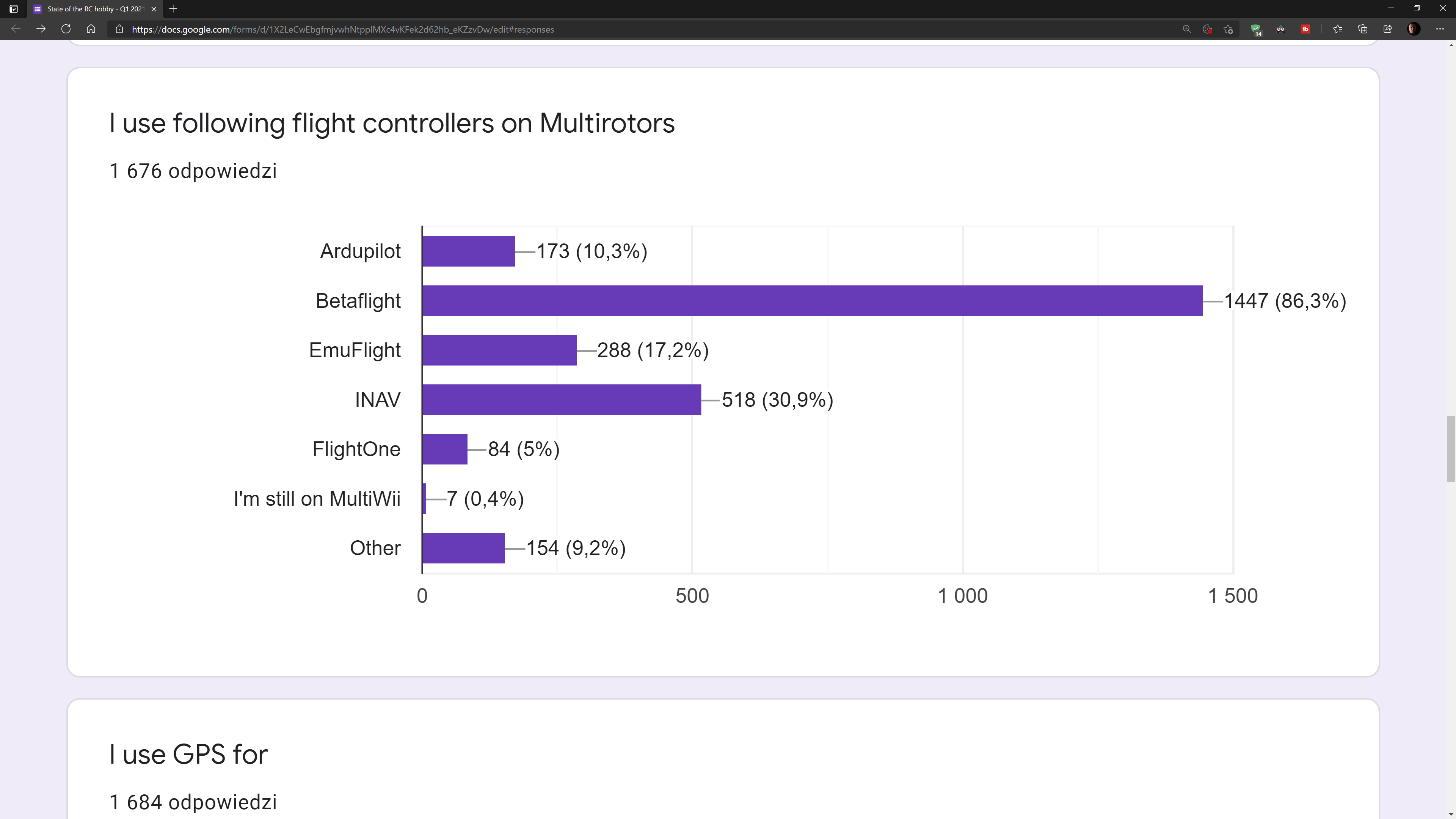 Here, no surprise. Just like expected, Betaflight owns the market
. No doubt about it. INAV is second, but the difference is more than 55 percentage points. Then it's EmuFlight and Others. Because KISS was not specified, it hides in the Others category. 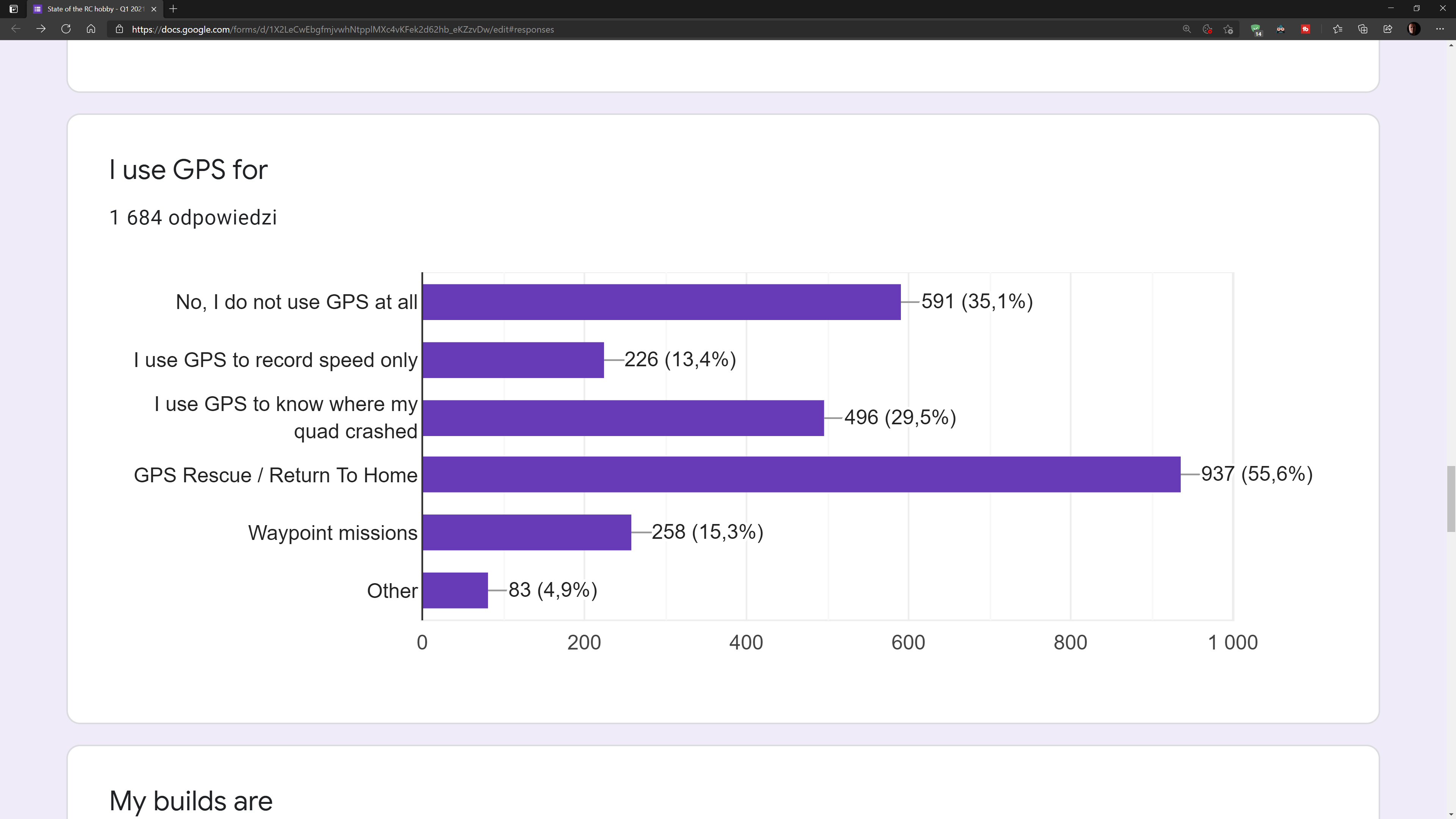 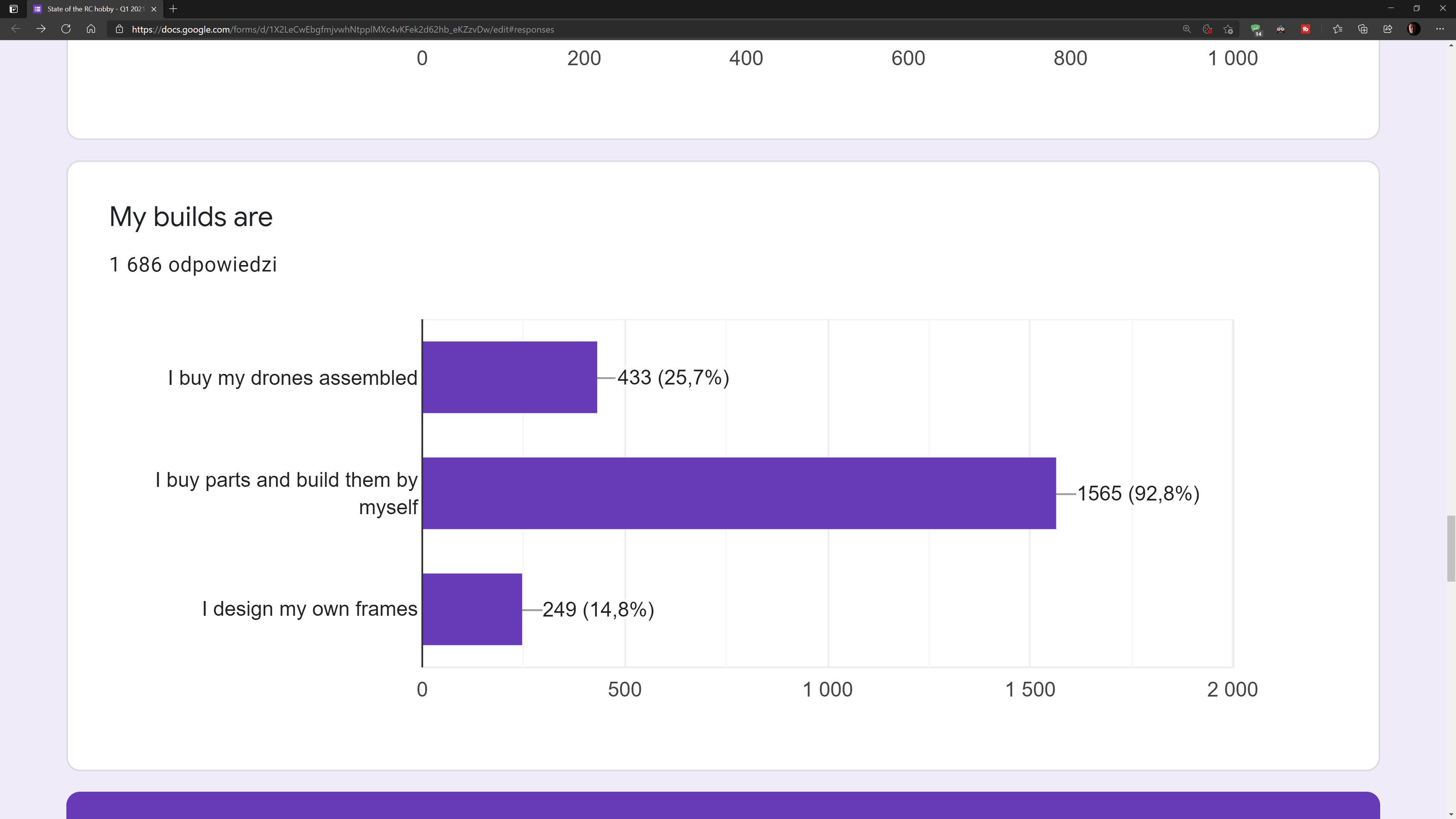 Looks like FPV is Do It Yourself sport. More than 90% of you admit that you build your own drones and only 25% buy them assembled. To my surprise, the number of pilots that design their own frames is slightly more than 14%. I expected this to be much less. 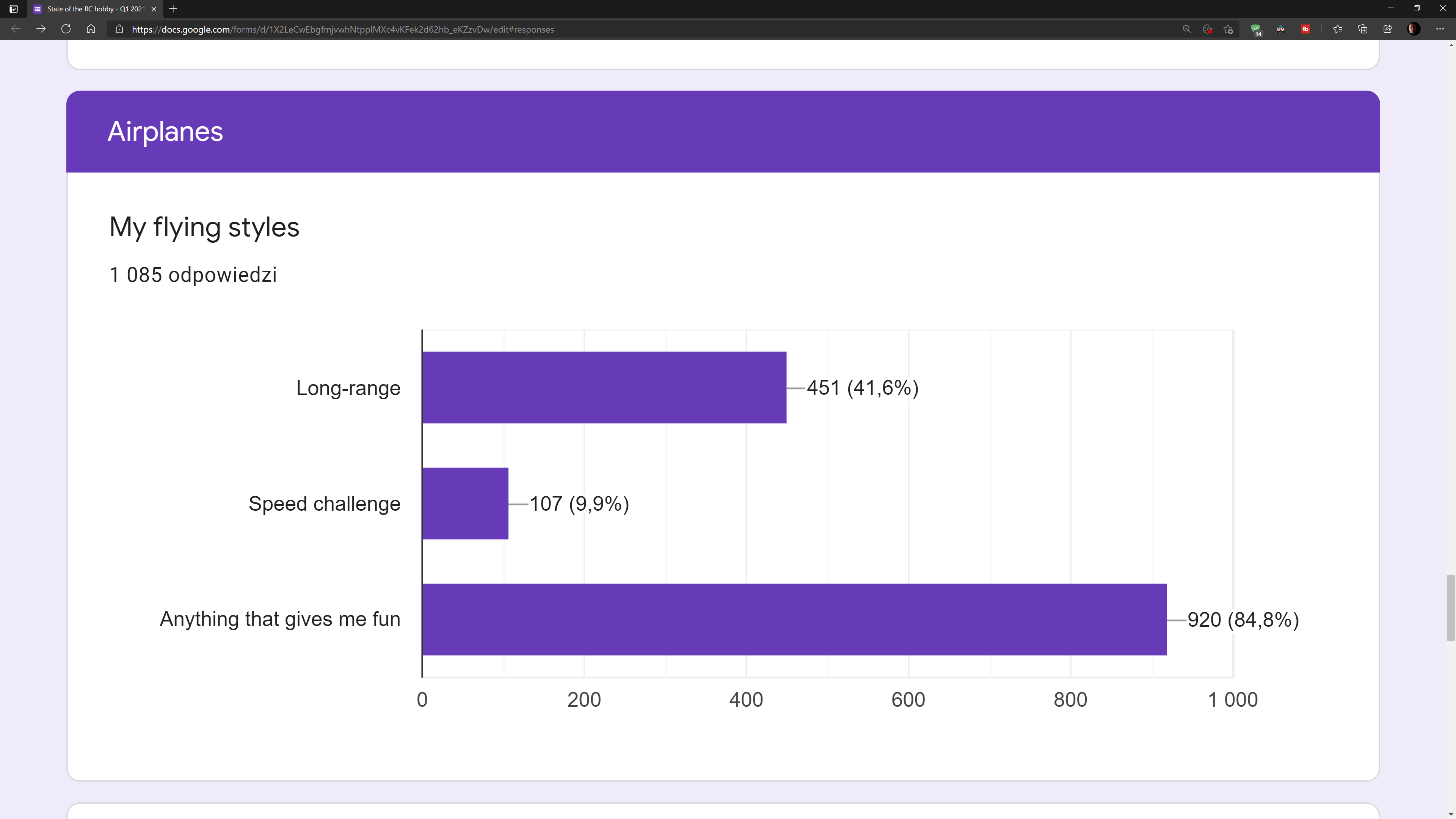 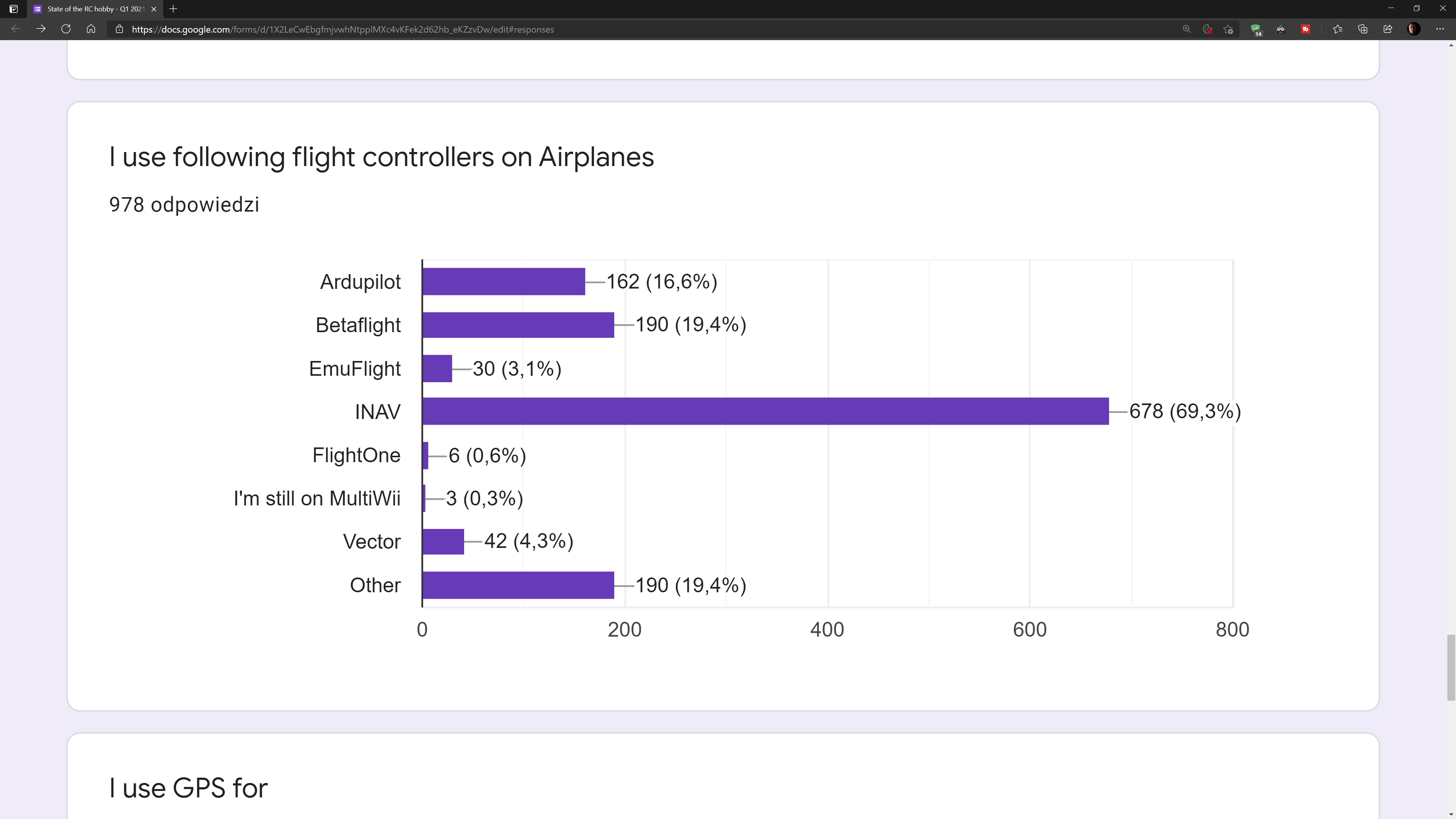 OK, INAV rules and is the most popular airplane flight control software. What surprised me, is how many people use Betaflight or EmuFlight on airplanes and flying wings. Why? 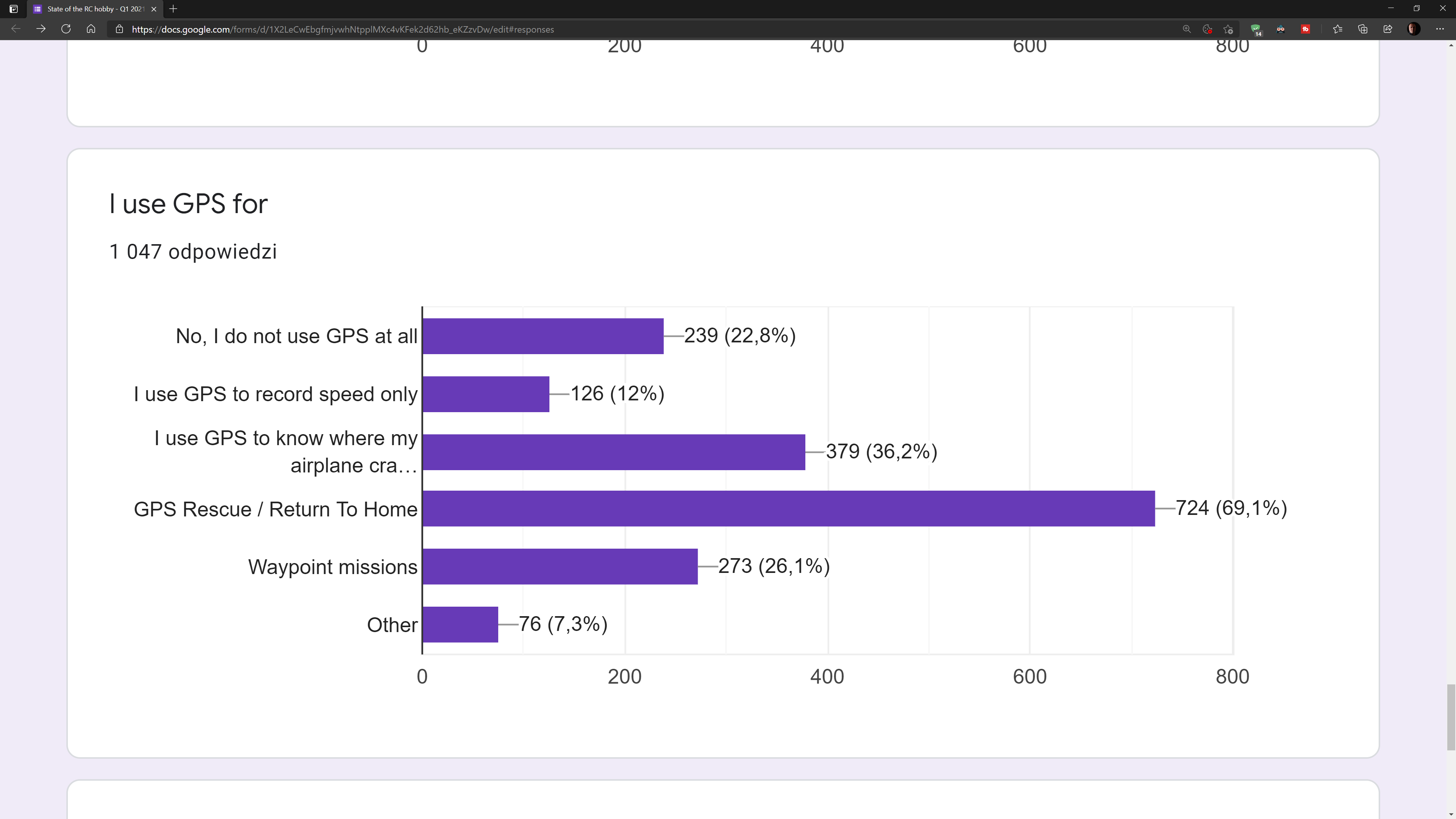 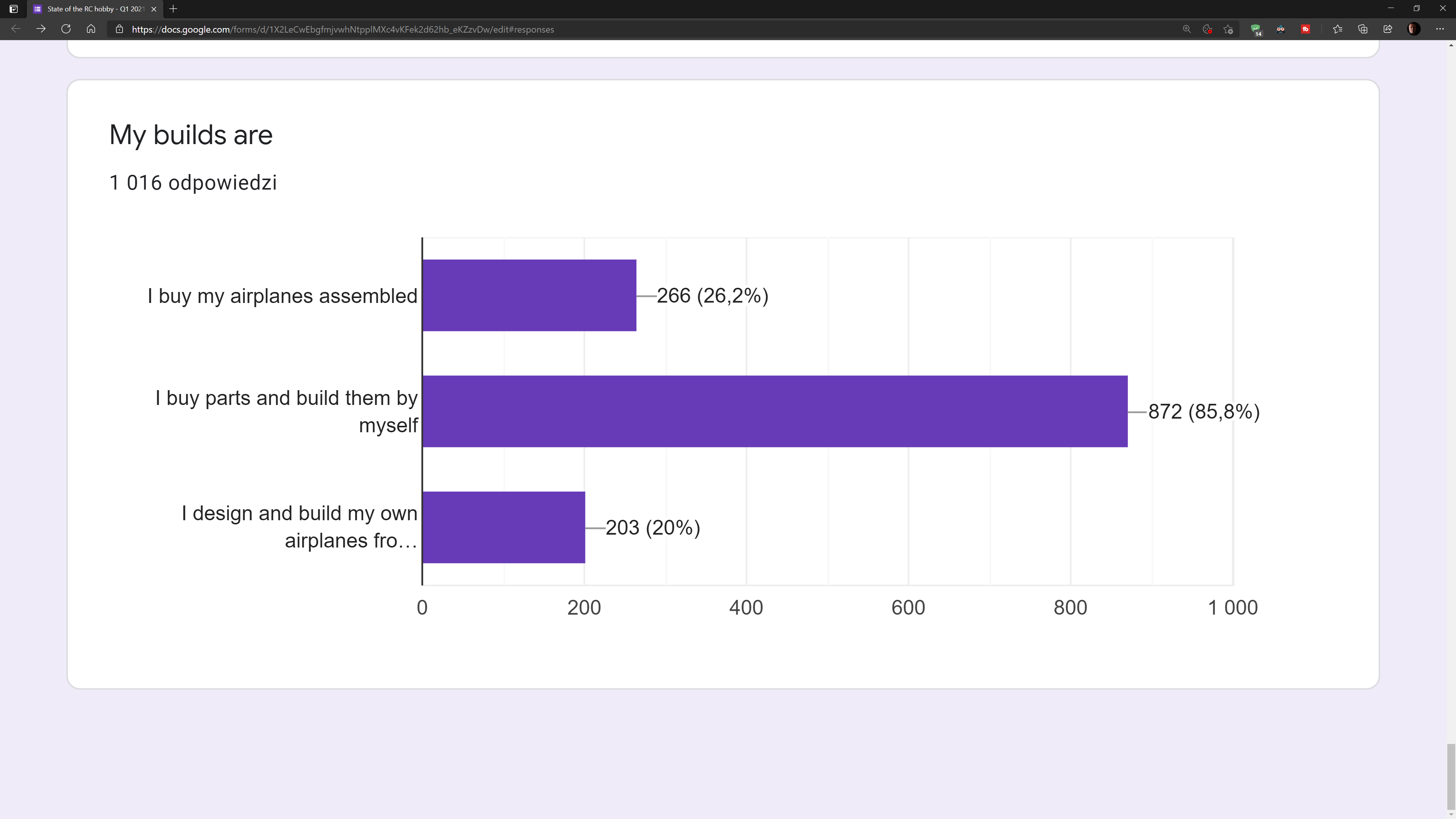 One more time, we build RC airplanes over buying. However, I was hoping more people is building from scratch. Hmm....